HOW TO GET RID OF ANTS IN THE HOUSE

get a free quote

Do you have a problem with ants in the house? Although not a major pest, ants in the house or garden can be a real pain. The problem can become worse in the warmer weather when ants are at their peak. And once they find their way in they will continually be in your kitchen due to their scent trails.

Although they are less likely to carry disease than other pests like cockroaches they can still bring in unknown pathogens, depending on where they have been.

Ants are very common in the UK. The black ant and the flying ant are actually the same species. This is the one you are more likely to be aware of and see around your home and garden. The carpenter ant naturally lives in forests but can invade the home too. A third ant, mostly found in warm buildings, such as bakeries or with machines giving off lots of heat is the Pharoah ant.

Black ants are very common in the UK and normally reside in gardens. They can make nests in lawns and reside in colonies of normally around 4,000-7,000 but can reach sizes of 40,000 workers in rare cases. Each colony has one queen and the rest are workers. Males are produced for reproduction.

As ants mate on the wing each year they produce a host of flying ants during the mating season. In the UK this is normally during the warmer weather between June and September. Once mated the queen digests her wings and burrows into the moist ground to create a nest. She then lays eggs and the eggs hatch after 8-10 weeks. The first workers then expand the nest and take care of the queen. Her egg-laying capacity then increases too.

Worker ants can live for at least four years and queens for almost fifteen years.

Ants leave chemical trails for other ants to follow and are attracted to sugary food. Their diet consists of nectar, small insects and fruit. Ants will ‘farm’ aphids for the sticky honeydew secretion these insects excrete.

If you have a lot of ants in your garden it is likely that you will soon find ants in the house too!

Once you have a rat infestation it can be very challenging to remove them. 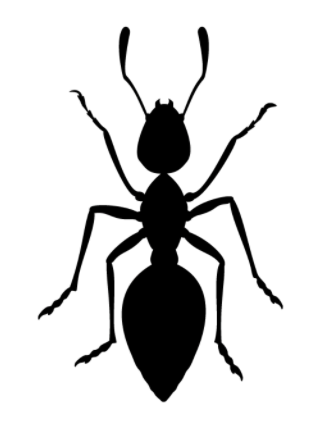 In the natural environment, the carpenter ant aids in forest decomposition by turning decomposing wood into sawdust. Unfortunately, if they get into buildings they can cause untold damage as their burrowing can damage structures. They live in moist, decaying or hollow wood. In a house, this is likely to be window frames and in the eaves.

They do not eat wood but like the black ant live off sweet liquids. They also eat dead insects.

The pharaoh ant is a tropical species of ant and is only found in heated buildings. They are smaller than the common black ant and their bodies are a yellow to red-brown colour. Apart from sugary foods and dead insects they also eat grease. Pharaoh ants have also been known to make holes in rayon, silk and rubber goods.

The ant has a minimum breeding temperature of 18 degrees Celsius, with 30 degrees being optimum. This means identifying potential nest locations can be a little easier by locating heat sources. However, the size of the nest tends to be small. Once a nest worker threshold is reached the ants will raise new males and queens to ‘bud’ a new nest. This budding is a major factor in the invasiveness issue found with this ant. Of all the ants, if you have Pharaoh ants in the house or your business premises you are advised to employ ant pest control services.

How to Get Rid of Ants in the House 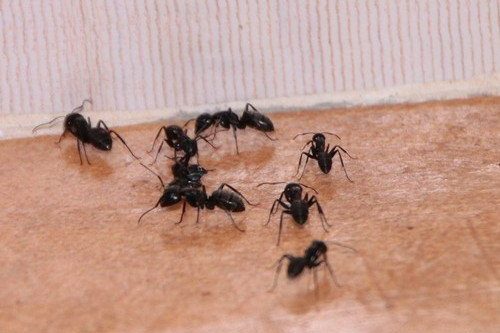 First of all, watch to see how the ants are getting into your house. If possible seal up these entry points. You will also want to wash the area to eliminate any chemical trails they have left for other ants.

Be sure to clean up any sticky residues or spills and cover any sweet foods to remove their potential food source.

You may be able to get rid of ants by buying various off the shelf ant killer products. You can also look for and destroy the nest. However, it is possible that one nest indicates that there may be more so you may not totally get rid of the ants.

Destroying a nest may also mean that the ants then move to another nearby location.

If you are still having a problem then you can call Rapidkill Pest Control Services and we’ll come and help completely get rid of the ants for good.

LET US Give you a free quote

get a free quote
N

1. If you want to get rid of ants in the house for good get in touch with us using the form below. We will get back to you within 24 hours to discuss what needs to be done and explain the process to you.

2. Our professionally trained technician will then survey your property to assess the level of the problem. The technician will be looking to see where the ants are getting in, what is attracting them and then consider the appropriate course of action.

3. The next step is to treat the ant pest problem. When there is an ant infestation your pest control service provider will treat your home using environmentally approved and safe products. This is likely to be a specialised powder or gel that the ant sees as food. They then take this back to the nest.

4. If you want us to come out after treatment we also provide a follow-up service to check that the process has been effective.

Rat Preventation and After Care

Looking for Ant Pest Control near me?

We are here to help you…! We always provide an immediate response. Give us a call and our Ant Exterminator will be there and do Ant removal from your Loft or Kitchen.

Get in Touch Today